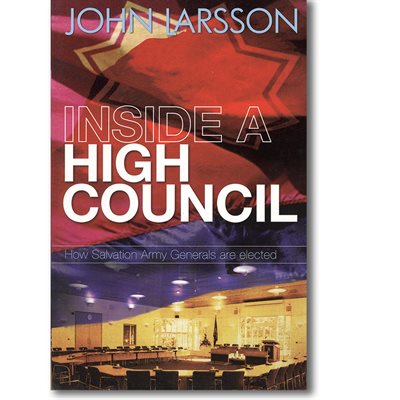 Press and move to zoom.
Mouse over image to zoom.
Click to enlarge

Inside A High Council

How Salvation Army Generals are Elected

The international leader of The Salvation Army is elected by a High Council comprised of more than 100 of the Army’s most senior leaders from around the world.

In this book the author invites readers to step inside a typical High Council in session at the Army’s conference centre in Sunbury-on-Thames to observe what happens.  His role is that of a tour guide, explaining and giving the background to the various stages of an event that lasts a week or more.

Drawing on the recollections of previous Generals and little-known historical data, the author weaves the material into a fascinating factual and human interest account of what takes place when a High Council meets.

The book is a sequel to the author’s 1929 – A crisis that shaped The Salvation Army’s future, which deals with the dramatic events of the first ever High Council held in that year.

John Larsson was world leader of The Salvation Army from 2002 until 2006.  It was the culmination of a lifetime of service as a Salvation Army officer given in the United Kingdom, South America, New Zealand, Sweden, and as Chief of Staff at International Headquarters.  He is the author of a number of books, a widely published composer of music and the co-write of ten musicals